According to American Police Beat, “somewhere between 2-6 times more officers kill themselves each year than are killed by the bad guys.” Thousands of officers are currently in crisis—experiencing trauma, family and financial distress, behavioral health challenges, substance abuse and other health issues. Employee wellness programs shouldn’t wait for crisis to occur, but should begin during the hiring process and continue through retirement. Both preventative programs and crisis intervention should be utilized to influence the professional and personal lives of employees and their families. When organizations identify healthy applicants and partner with health professionals to maintain employee health, these organizations have the potential to improve morale and productivity while reducing complaints and liability.

Officer and Agency Wellness—Hiring and Retiring Healthy® will introduce attendees to the innovative Indianapolis employee wellness program that US Attorney General Loretta Lynch has called “the model for law enforcement wellness.” Ground-breaking research and proven strategies to address officer distress from the Indianapolis Model© will be introduced in this course. These strategies are intended to aid agencies in reversing the trends of organizational paralysis that result in a failure to intervene as employees face personal and career crisis. Upon completion of this course, participants will have gained insight into strategies for designing an agency infrastructure that supports and maintains healthier employees. 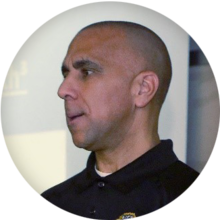 Captain Brian Nanavaty retired in 2017 after 33 years with the Indianapolis Metro Police Department (IMPD) where in 2010 he created the IMPD Office of Professional Development and Wellness (OPDW) and served as Professional Performance Manager. His innovative programs created a culture of health at IMPD and a reduction of officer disciplinary referrals by 40%.

During his career and in retirement Nanavaty continues to instruct officers, executives, union officials, insurance providers and clinicians in the areas of personal and career survival for the Department of Justice (DOJ), the FBI, Safe Call Now, the Dolan Consulting Group and at major conferences including IACP, ILEETA, IADLEST, NOBLE, FOP and EAPA conferences. Nanavaty was a headline presenter at the 2017 National Crime Summit and has been featured on Police One.com and in Law and Order magazine and the FBI Law Enforcement Bulletin.

Nanavaty currently serves on the FBINAA and Fraternal Order of Police (FOP) Safety and Wellness Committees where he assisted in the legislation for the Law Enforcement Mental Health and Wellness Act (2018). As part of his committee duties he has also designed a training portal for members and vets treatment and recovery facilities for first responders. Nanavaty additionally serves on the Executive Board of the National Institute for Public Safety Health, is a member of the Critical Incident Stress Management working group for the IACP Policy Center and is a consultant with the Police Executive Research Forum (PERF) on officer wellness issues.

In 2015, Nanavaty and IMPD received the inaugural Destination Zero Valor Award from the DOJ and the National Law Enforcement Officers Memorial Fund (NLEOMF) for his officer and agency wellness programs and in 2016, in addition to appearing in front of the US Congress on the issue of officer wellness, Nanavaty was a finalist for the prestigious International Association of Chiefs of Police (IACP) Officer of the Year award. In 2016, the White House sent US Attorney General Loretta Lynch to Indianapolis as part of the President’s Task Force on 21st Century Policing where Lynch stated “Captain Nanavaty’s officer and agency wellness program in Indianapolis should be the model for law enforcement across the US.”

Captain Nanavaty attended Franklin College (IN), Drew University (NJ), and the University of Virginia. He is a graduate of the 255th Session of the FBI National Academy in Quantico VA. From 1994-2003 he was Adjunct Professor of Criminal Justice at Indiana and Purdue Universities.